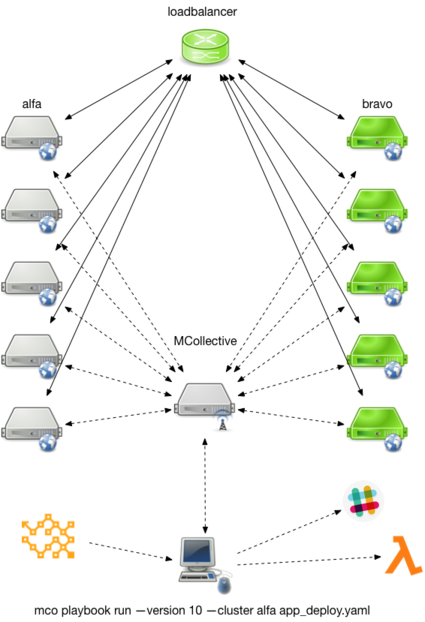 An update on my Choria project

Some time ago I mentioned that I am working on improving the MCollective Deployment story.

I started a project called Choria that aimed to massively improve the deployment UX and yield a secure and stable MCollective setup for those using Puppet 4.

The aim is to make installation quick and secure, towards that it seems a common end to end install from scratch by someone new to project using a clustered NATS setup can take less than a hour, this is a huge improvement.

Further I’ve had really good user feedback, especially around NATS. One user reports 2000 nodes on a single NATS server consuming 300MB RAM and it being very performant, much more so than the previous setup.

It’s been a few months, this is whats changed:

Meanwhile I am still trying to get to a point where I can take over maintenance of MCollective again, at first Puppet Inc was very open to the idea but I am afraid it’s been 7 months and it’s getting nowhere, calls for cooperation are just being ignored. Unfortunately I think we’re getting pretty close to a fork being the only productive next step.

For now though, I’d say the Choria plugin set is production ready and stable any one using Puppet 4 AIO should consider using these – it’s about the only working way to get MCollective on FOSS Puppet now due to the state of the other installation options.

I share a ton of links, I have a thing that harvests my twitter account and over a few years it has collected over 4 500 links. Twitter is great for that but also it’s hard to add a bit of annotation or comment to those shared links in the constrained space. Of course I also curate my Free for Dev list which has grown quite huge, so I come across a lot of interesting stuff.

Everyone these days seem to have a news letter and I’ve toyed with the idea for a long time. The idea would be to share the random things I come across, no real theme, goal or set frequency, just a list of stuff I find with some short comments whenever I feel I have a good selection of things to share. I could stick them up here as blog posts but I don’t want one of those sad blogs where the entire frontpage is weekly link lists 😉

Well I’ve decided to give it a go, I signed up with Mail Chimp and set something up there. Last week I tweeted twice about it and tried to get some early adopters on board for the first mail in order to get some feedback and so forth. This has been quite positive thanks a lot to those who took the time to send me a note.

So if you’d like to subscribe please head over to https://www.devco.net/ and sign up at the bar above, it’s the usual Mail Chimp thing so you’ll get a confirmation email to double opt-in with. If you want to see what you’re getting yourself into the archive can be found at Mail Chimp, there is one mail there already.

The next one should go out tomorrow or so, looking forward to trying this out!

I recently gave a talk at PuppetConf in San Diego covering the new Lookup feature in Puppet 4, you can see the video below.

The slides for this talk can be seen below:

External Data in Puppet 4 from ripienaar

For a few releases now PuppetDB had a new query language called Puppet Query Language or PQL for short. It’s quite interesting, I thought a quick post might make a few more people aware of it.

To use it you need a recent PuppetDB and as this is quite a new feature you really want the latest PuppetDB. There is nothing to enable when you install it the feature is already active. The feature is marked as experimental so some things will change as it moves to production.

This is your basic query it will return a bunch of nodes, something like:

There are a bunch of in-built relationships between say a node and it’s facts and inventory, so queries can get quite complex:

This finds all the RedHat machines in a particular DC with Java 1.7.0 on them. Be aware this will also find machines that are deactivated.

I won’t go into huge details of the queries, the docs are pretty good – examples, overview.

So this is quite interesting, this finally gives us a reasonably usable DB to do queries that mcollective discovery used to be used for – but of course its not a live view nor does it have any clue what the machines are up to but as a cached data source for discovery this is interesting.

You can of course query this stuff on the CLI and I suggest you familiarise yourself with JQ.

This is in ~/.puppetlabs/client-tools/puppetdb.conf which is a bit senseless to me since there clearly is a standard place for config files, but alas.

Once you have this and you installed the puppet-client-tools package you can do queries like:

Your master will have the puppetdb-termini package on it and this brings with it Puppet functions to query PuppetDB so you do not need to use a 3rd party module anymore:

At the recent PuppetConf Puppet announced that their enterprise tool puppet job supports using this as discovery, if I remember right it’s something like:

At PuppetConf I integrated this into MCollective and my Choria tool, mco feature still due a release (MCO-776, choria):

Run Puppet on all the nodes matched by the query:

The above is a bit limited in that the apps in question have to specifically support this kind of STDIN discovery – the rpc app does.

I then also added support to the Choria CLI:

These queries are a bit special in that they must return just the certname as here, I’ll document this up. The reason for this is that they are actually part of a much larger query done in the Choria discovery system (that uses PQL internally and is a good intro on how to query this API from code).

Here’s an example of a complex query – as used by Choria internally – that limits nodes to ones in a particular collective, our PQL query, which ones have mcollective installed and running. You can see you can nest and combine queries into quite complex ones:

This is really handy and I hope more people will become familiar with it. I don’t think this quite rolls off the fingers easily – but neither does SQL or any other similar system so par for the course. What is amazing is that we can get nearer to having a common language across CLI, Code, Web UIs and 3rd party tools for describing queries of our estate so this is a major win.
« Older Entries
Next Entries »